And when I say that I mean hello!

The other day we were doing house and we ran into some teenage girls. They asked where we were from and as soon as they heard my companion was from Las Vegas they got way excited and started asking all kinds of questions. haha. Anyway, we ended up teaching them about the restoration, and then as we were leaving they all said , "Hello! HELLO!" In the Italian language ciao means hello or goodbye. But whenever Italians are taught hello, they are told it means ciao. haha. So people here always say "hello" when they mean to say "goodbye!"

This week went pretty well. We did a lot of great things. For example, we ate pizza last night. haha. Our new assistant to the ward mission leader loves to buy us pizza! Me and my companion decided that we were going to get healthy and in good shape, but it seems that Foggia is totally against us.

We went to the beautiful city of Manfredonia this week to eat lunch with some new members. Manfredonia was started years ago by King Manfredi. haha. I didn't really get the chance to see much of the city, but it seemed pretty cool. Here is the view from their house:

I've found that my mission fits me perfectly (it's not really a surprise because I called by inspiration to be here), but it's still really interesting. For example, I love to travel. This last week I went to Bari, Manfredonia, Panni, and then on other weeks I go to San Severo, Aquilia, and other random cities. I've found that I travel tons. It's way sweet. We go to all these places because Bishop takes us there to find Less Active members, or visit members that can't come to church.Unfortunately we take rides in Bishop's car that isn't always the most consistent, and also doesn't have a working AC!! 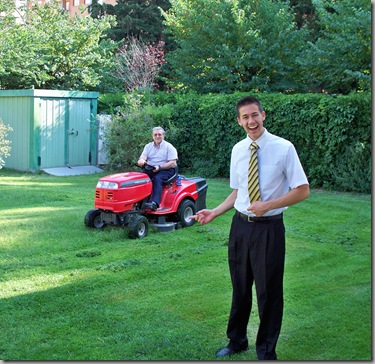 Our Bishop and his riding lawn mower!

Going to Bari is my favorite trip. We go there for our district meetings, and it means a two-hour train ride!! (It also means a chance to pass by the Bari tie market). Anyway, this week I met some pretty cool people on the train. I met one guy named Joe. He's from Gambia (West Africa), and he's Muslim. He was a really nice guy, and he told me I should visit Gambia because everyone there is smiling. If they're anything like him then it's definitely true!

On the ride back from Bari I met a girl (24-yr-old) that studies languages. She actually spoke quite a bit of English, but I taught her the gospel in Italian because she couldn't understand well enough. She stopped going to church because they changed Priests and the new priest is old and boring. I told her, come to our church! Our members are the ones that give talks! haha. She was pretty cool. She also had a friend in Taiwan that she speaks Italian with on the internet. I always meet my favorite people on the train.

We moved to a new housing area this week. It was really weird. I don't have any photos, but basically the houses kind of have front yards and there are four families in each unit. It's a really quiet area, and we didn't have any luck our first time going. The people were friendly, but just not interested. The cool part about this area is that there are tons of families there, so we're hoping to find someone that wants to listen to our message.

I guess that's about it for this week. We're part of the Rome mission, but nothing has really changed yet. I still haven't even heard from the new mission president. I guess he's really busy trying to get a hold on things, especially since he has two missions combined into one. haha.

One other thing we've been doing is going to Less Active members. I can't remember if I told you, but we met one guy that has been Less Active for years. He came back from his mission after only going out for a couple months. It's pretty sad because he's caught up on little things about doctrine. Basically, he wasn't ready to hear some different things, and he just didn't ever have enough of a testimony. He talks to us like he thinks that he's going to say something that is going to damage our testimonies or something, but the nice thing is that I realized that anything he could say wouldn't effect me! I know that the church is true and I know that Joseph Smith was a prophet that restored the church with the priesthood of God. I know that this is the only true church of Jesus Christ.He also told us a bunch of different things, but it's not anything I haven't heard before. He's too stubborn to listen when we explain things to him. It's a real shame.

A great thing that happened this week is we talked to one of our less active members that always meets with the Jehovah's Witnesses, and he finally came around. haha. I've learned way more about their doctrine than I ever wanted to know. I guess the cool thing is that I've done a lot more studying of the Bible.My Italian Bible has gotten very marked up. I also have been reading the old testament in English, and it's pretty sweet. Well, Genesis is pretty sweet. I think last time I started reading the old testament I made it to Leviticus and then it just started getting too boring. haha. But it's going pretty well.

Alright, I better go. I love you. Have a good week. Mom,

P.S. My cooking is getting great! Making homemade pasta is easy and fun! 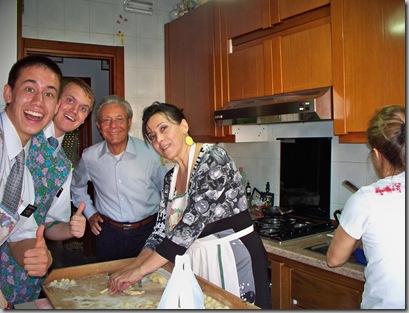 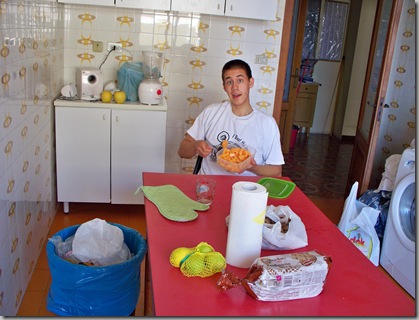