So this week was pretty sweet. Well, in the sense that I enjoyed it and we met a lot of great people. As far as missionary work...it's a little bit dead. haha. They have something here called ferragosto. Basically everyone goes on vacation for a couple weeks. haha. We've gotten a lot of great contacts, but everyone says that they are busy until September!! So I'm pretty sure that the work is going to go crazy in September!! It'll be like a birthday present. For now, we're just going to keep doing a lot of proselyting, and finding people. They'll probably all tell us that they're going to leave until September, but that's alright.

It's really interesting how true the things are that are written in Preach My Gospel. Lately we've been studying a lot about finding people, and we've been following everything that we learn. One thing that is says is that sometimes when you talk to people, they won't recognize at first that you are messengers of the Lord. So anyway, the other day I stopped a lady and I told her that we're in the area explaining to people how families can be eternal and we can live with our families after this life. She then told me that for her families aren't forever. hahaha. Anyway, I can't remember everything that we said, but by the end of it all we had talked for about 1/2 an hour about the church, and given her a Book of Mormon! It was pretty awesome.

I also decided that Venezuela is the place to serve a mission. We were doing houses the other day, and a lady from Venezuela was biking and stopped us. She said that her husband wants to learn from us. Then her husband came over with his two kids and told us that he wants us to teach him more about Jesus Christ!! haha, it was totally crazy. Unfortunately they don't speak Italian really well, so we put them in contact with a missionary in our city that speaks Spanish. Since then me and my companion have been joking with each other about what it would be like proselyting in Venezuela -- people stopping you on the street as soon as you walk outside your apartment, setting baptismal dates on the place ride over, churches with two baptismal fonts so they can do more baptisms at once, etc.
hahaha.

Anyway, so things are going really well. Our new members are all doing fantastic, the ward is doing well, and once September comes our investigators should be around. This city is great. Every week we get fed by members at least twice. Once on Saturday by Sorella Panza, and then on Sunday by other members. Sorella Panza is a pretty interesting lady. She loves the missionaries. No one really knows how long she's been feeding the missionaries for, but I know it's at least for a few years. She has four pet cats! They usually end up on the table a few times every time we eat there, haha. It's pretty crazy. Last time we went she showed me all the photos of her family from the last 100 years. It was pretty nuts. I had heard various weird things, but I actually enjoy going over to eat there. She's a pretty good cook.

Have a great week. I hope everything's going great for you.
Love,

P.S. Today we went to Alberobello. It was pretty sweet. They have some pretty funky houses there.
We went with me, my companion Anziano Gilbert, Anziano Fernandez-Ruiz and his companion(from Italy), Sorella Jenkins, Hirsh and Tonoko (Peruvian but lives in Genova, Italy). 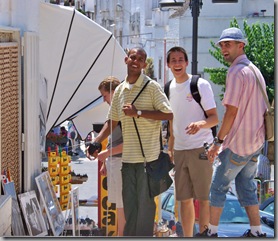 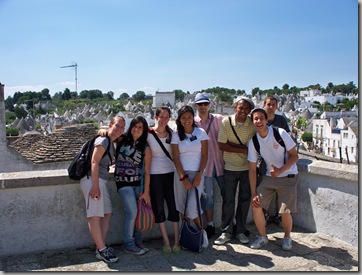 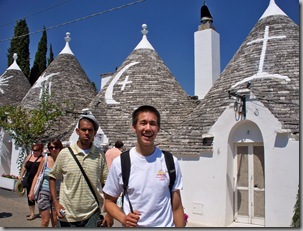 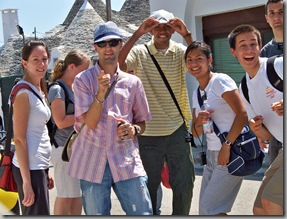 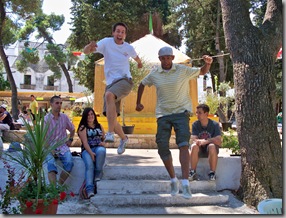 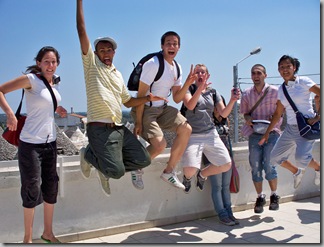