This week really flew by. It's because we've really started heading to some different areas and being in a new environment makes time disappear.

We went to Marano (a paesino near Cosenza) because a member invited us over for lunch with one of her friends. It was pretty awesome. The lunch and the friend. Her name's Mara and we taught her how to pray. (Address God, Thank him for what you'd like, Ask him for blessings, and "close in the name of Jesus Christ. Amen") Before she did the cross and didn't really close her prayers. I mention the layout because we found out why one of our investigators isn't progressing. She has been praying "in her own way" and she also doesn't believe that God will respond to her prayers because he hasn't responded for 43 years.

Unfortunately she doesn't really have any faith. Her husband knows the church is true, and is ready for baptism except he doesn't want to do it without his wife. We also have another investigator that knows the church is true, but her husband won't let her get baptized. Then we have three others that are also completely ready for baptism except two are afraid of messing up after baptism, and one is afraid that she'll marry someone outside the church after her baptism. So we have great work going on right now, but we just need our investigators to demonstrate more faith and then we'll have a lot of baptisms here!! This week we're preparing them for conference and I expect that things will be a lot better after that.

This week we also found a family we had been praying for! We've been praying to find a family with three kids, and then we saw them and taught them and it was awesome. I can't remember the question, but we asked the mother something and she was being silent and then her daughter said "Dio!" Which means "God." Crazy cute kids, and we're going to go teach them when they come home after Easter. We've also been doing a lot of less-active work. Well, we've been trying to. We were able to meet with Francesco Trausi again this week (he works at McDonalds). I also had my first Big Mac Meal in Italy!! It was great. Basically what he said is what everyone loves to say. God is merciful, and he loves us, so we'll all be saved. Which is crazy. At least it is if they believe in the Bible and Jesus Christ. I've decided my favorite New Testament scripture is Matthew 7:21
"Not every one that saith unto me, Lord, Lord, shall enter into the kingdom of heaven; but he that doeth the will of my Father which is in heaven."
It's pretty straightforward.

I had a pretty cool experience this week after correlation. I tried to say something in English, and I found out it was easier to speak Italian! haha. I also found out why there are so few members here, and yet we have a pretty good sized building, and we have a Family History Center and the District President's office. Well, it turns out that a few years ago we had about 70 active members!!! You may be thinking, what happened? Don't you only have 50 or less members even on record? Well it turns out that the reason why membership is so low in the Calabria is because all the members moved up north for work because there's no work here! The branches here all used to be pretty sweet I guess, but then they shrunk because everyone moved. So now in our mission we have the Puglia stake, Sicily which is about to become a stake, and then we have us. We probably won't become a stake for awhile because all the branches here don't have a lot of members.

Anyway, everything's really great here in Cosenza. The weather outside is beautiful. I almost wish that we had a yard so I could go out and do yard work. haha. I probably really will plant some Basilico and Peperoncino in the next house that I go to. Just in a pot.

Like I said, I've really enjoyed the pasta and rice and things that we've been making lately, but last night I had something awesome. I basically made potato wedges. It was delicious. For some reason our house has american hickory barbeque sauce, so I had it with that. I think I'm going to save money throughout my mission, and then the last transfer just have hamburgers and fries every day! hahaha. just kidding, just kidding. At that point I'll be able to wait until I can have IN-N-OUT.
The church is true. Pray for faith. Pray for the Spirit. Have a great week.

p.s. Pray for our investigators!! : )
p.s. This  photo is of our church!! There was crazy mold, and now they're finally getting it taken care of. 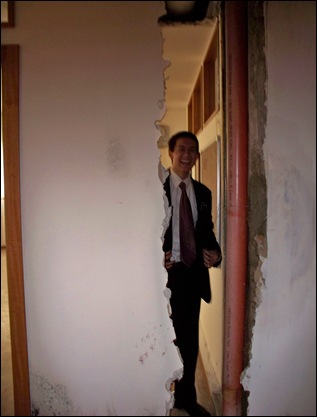