So this last week we had the baptism of 8-yr-old Sara Succurro. I know, it doesn't really count, although we did help teach her.  The baptism was totally awesome. They had tons of food afterwards!! I don't remember my baptism being anything like that! There was huge attendance at the baptism, and another highlight would probably be that there was a musical number done by the Anziani (In other words, me and my companion). We had helped Sara plan the baptism and she asked us to do that. Our baptismal font is alright. It's made of huge PCV pipes with a tarp like material, but it's actually really sturdy (I think). One thing that wasn't so great about the baptism is that Fratello Favre, after coming out of the baptismal font soaking wet, tried to walk to the office to change and slipped on the tile floor!! I saw just the end of it as he fell flat foward. He's a stud though and got changed and came back out. Right after though he didn't stay for the food, but went to the emergency room to get his arm taken care of (He his his shoulder really hard). 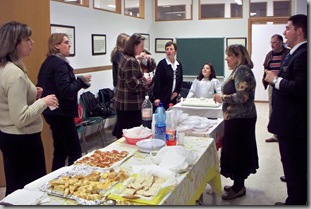 All the food after the baptism! 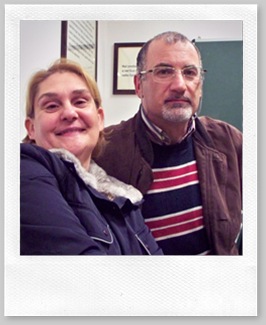 Since I always talk about them, this is Anna and Giuseppe! 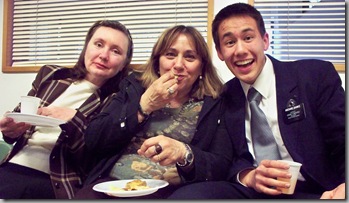 Here I am with Sorella Spadafora!

The work in Cosenza in booming! We have two baptisms in the next month (investigators), and the members are helping us like crazy. I can only imagine if members everywhere did as much work as the members do in Cosenza. It would be crazy.

I guess I should explain to you the two baptisms in Cosenza. One is Narsissa who we've been teaching that my first transfer here wouldn't meet with us because her boyfriend didn't like us. I'm pretty sure they broke up, and now she comes to church every Sunday!

The other one is really crazy. It's Angela Sicilia. Her husband is atheist and wouldn't let her be baptized. We talked to her a few weeks ago and we decided that we would all fast that she could be baptized. We fasted...with faith...and her husband is fine with it!! She's going to baptized on May 1st.  Teaching her is ridiculous. The first lesson we taught her, she first pulled out a well used triple and said she's read the Book of Mormon three times. Then, she pulled out a well marked Preach My Gospel!!! It was really crazy. So we just taught her out of that and she already knew everything. I'm pretty sure she's as prepared as anyone possibly could be.  Her mother is the Relief Society President and has been giving us amazing referrals. 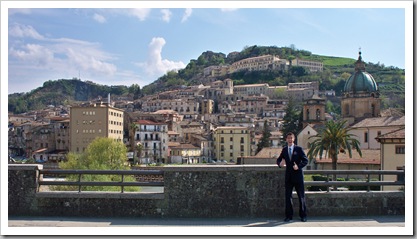 So now, right after Cosenza becomes amazing, I got transferred!! I'm now further north in the city of Foggia. The good news is that in two weeks we have...two baptisms!! So it appears that the work is going great here as well. We have four missionaries here, and we have an actual ward!  Apparently the members don't love helping us though, but we'll work on that. I was shocked when transfer calls came. I was doing some killer work in Cosenza and was very happy and comfortable. I also thought if I went anywhere I want to go to Palermo where they actually have Chinese members and I could do some sweet lessons in the presence of a member.

But Foggia has been great so far. I'm looking forward to working with a ward, having an actual church building that has a soccer field, and living in a four man city.

So far we haven't had a chance to do much proselyting, but I'm sure that will go well. My companion is Anziano Halverson from Las Vegas, NV. He LOVES to do SYL! (Speak your language). I can honestly say that I can very comfortably speak Italian now, so we chat about all kinds of things all day long. Blessings. Blessings. Blessings. I think we're going to have great success here because he also loves being obedient, and so it's a great companionship.

I also found out that one of the missionaries here, Anziano Cox, is related to my friend Dallin Cox from High School! It's his uncle. And one of the best things about Foggia: Anziano Rowland is in my Zone!!! That's my District Leader from the MTC, he's from Florida, and he's awesome.

Anyway, I gotta go.
Have a great week!

P.S. You know how people always ask what you learned on your mission? Well, here's what I would say so far: Patience, Charity, Fasting, and Italian.

Fasting is the easiest because I gained my testimony because God always responds to my prayers, but then I've found that every time I fast he responds that much faster and to that much bigger of requests! Charity and Patience because that's the only way you can get by serving with a bunch of 19 and 20 something year olds. And I've found that if you serve others because you love them then you are blessed, plus you are happier.

P.P.S. Here are some pictures of our apartment! 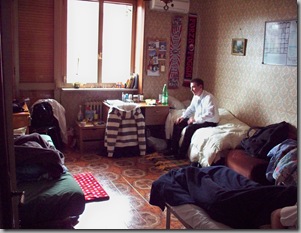 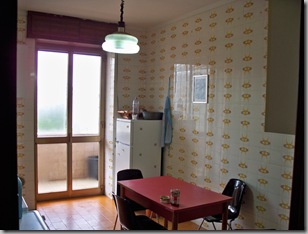 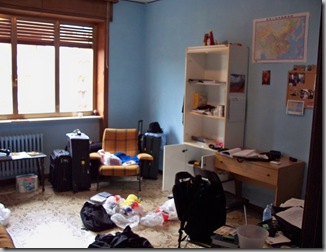