We had Anziano Texeira here from the 70 (as I mentioned last week), and it was crazy. We took him from his hotel to the church in Catania and then to the airport, so we had some good time to chat with him. It was nice.

After the conference in Catania we went over to Palermo to go on splits. Wow. Palermo is seriously awesome. I went with Anziano Larsen. He's only been out for about a month. We had a great time together. We met a lot of really cool people on the street, and we also did mostra that evening. If you don't remember, mostra is a big display that we use sometimes. I really love it because it's very effective. You can split up and talk to a lot of people around the mostra. We did it right by the sea, and so Anziano Larsen actually sat down and talked to a couple Italians that were looking out at the sea and talked to them himself for 20 minutes. That was really cool because it gave him the chance to use the language on his own, and he got their number and was really excited about that.

Did I tell you that we drove all the way to Catania? hahaha. That was a long trip. Thanks to traffic and construction it took over 10 hours! Then we went from Catania to Palermo, and then from Palermo to Cosenza, and the next day from Cosenza to Rome. 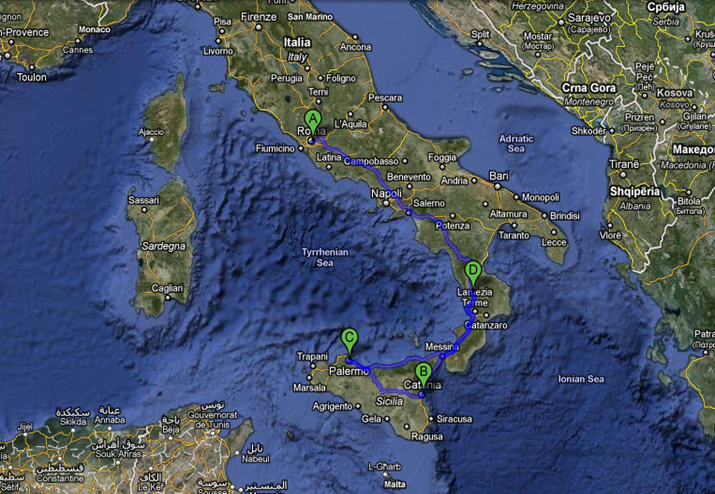 This week we're getting ready for transfers. Transfers are always fun. It's really cool because we get to help President when he does them. One thing that could be interesting this transfer is that we may be getting a couple of missionaries that have office responsibilities so that we can go out and do more work. I would feel bad for whoever has to do it, but one thing that Anziano Texeira said is that the Assistants are some of the best missionaries in the mission and that you basically can't have them in the office doing administrative work. I was really happy about that because that's the only downside to being an assistant. Everything else about being an assistant is totally awesome (serving all around the mission, helping train missionaries, being around President and Sister Kelly).

We got a challenge from Sorella Texeira. I'd like to invite you to do it. It's to read the Book of Mormon in the time that it got translated, which was 60 days. If you read it, meditate it's message in your heart, and then pray to know of it's truth, you will know through the Holy Ghost that it is true. I'm going to read it and follow the promise so that I can receive a reconfirmation of it's truthfulness. Will you do it too? I'm reading it in Italian.

Have a great week!

Next week I'm not sure when I’ll email because we're going to be busy with transfers. I'm seriously going to have a blast. We get the new missionaries on Tuesday and Wednesday. Then on Thursday the old missionaries go home, and transfers happen.