This week went pretty well. Actually, I take that back, it went amazingly well. hahaha. One of our investigators got baptized on Saturday. Her name is Irene. She's already really good friends with all the members in the ward, and has been an investigator for quite some time. The baptismal service was nice. 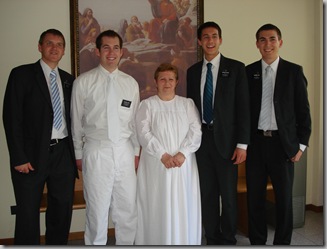 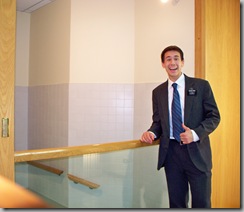 We also have great investigators right now. We should be having three baptisms in June!! So far. That's how many dates we set this last week. We also have one investigator that wants to get baptized soon, but he smokes and isn't trying hard enough to quit.

I went on splits with Anziano Shaw for a day and that was pretty awesome. He's from Sandy and goes home in 3 weeks! The whole day was really fun, but I think the highlight would be when we taught one of the sisters in our ward. We're helping her know how she can help us more during teaching appointments. During the lesson we both felt like we should change what we had planned on teaching her. By the end of the lesson she told us that now she knows exactly what she needs to do. It was great to know that we had both been following the spirit. She has a couple rebellious kids that she's worried about, and she also has to give a talk in church in a couple weeks that she was worried about. One thing I like about Anziano Shaw is that we have a similar teaching style. Neither of us are afraid to have some silent moments. One thing that bothers me when I teach with some people is that they always rush to fill in all the quiet moments. There's obviously a balance that is ideal.

I actually don't have that much else to say, so let me explain to you how our lunch generally goes down. We just do a rotation between the four of us. So basically I cook once every four days. We all cook more or less the same thing. Pasta with red sauce. We mix up what we put in as far as meat, cheese, spices, and types of pasta. But so far in my mission it seems like we always have the same thing for lunch. When not all four of us are here (which happens more often than you'd think), we just cook for ourselves. I like to have a tuna fish sandwich, or fried rice, or something else to that effect.

I'm going to go to Taranto for a huge conference!! It should be really awesome. I'll take lots of pictures. In two days I'm going to be in Bari for a Zone Conference. I'm pretty excited. I get to do a presentation on how to have an effective personal study.

Sorry I don't have much more to write about, but I'm pretty tired today and I can't really remember anything else from this week!

Besides the baptism on Saturday we also had to clean our house for the entire day. It was pretty crazy. I guess it was some sort of holiday here in Italy, so that's why we did it.

Anyway, have a great week!